Posted on September 18, 2015 by Dulcinea Pitagora

Sword Class NYC: A Safe Place To Be Fierce

Guest blog post by Sara Tunick, social worker and general manager and instructor at Sword Class NYC, where she studies kendo and has achieved 2nd Dan in Siljun Dobup.

Compared to others in my generation, I came out relatively late in life. I grew up doing what I was “supposed to do.” I played sports, did my chores, went to college, and I assumed that I would eventually marry a man and have babies. For as long as I was sexually aware, I’ve known that I’m not straight. I was raised in a very liberal and affirming home, but I was also told that bisexuality was a myth—everyone was either gay or straight. It took several toxic relationships, years of therapy, and an identity crisis or two for me to own my queer identity. By my mid-to-late 20s, I knew who I was attracted to and how I wanted to love them. I had a Masters in Social Work and was working with dually-diagnosed LGBTQ homeless youth in Manhattan. Though I wasn’t out to everyone yet, being queer was the center of my work and personal lives. 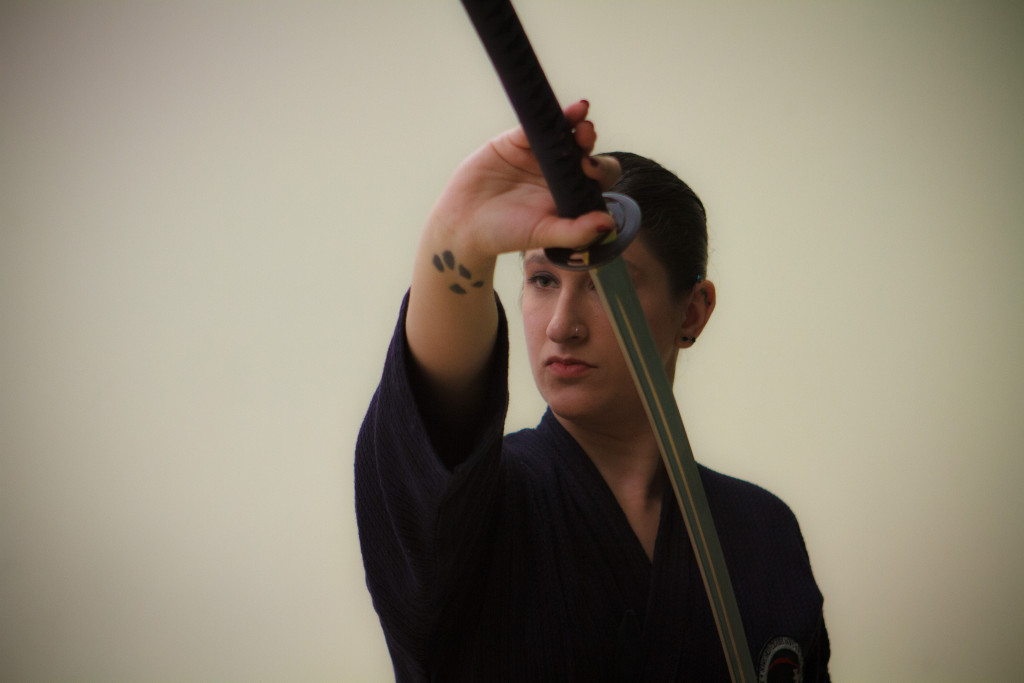 While I was in graduate school, a friend of mine began teaching martial arts classes in midtown. He had been studying Siljun Dobup (a Korean sword form that uses the curved katana) and kendo for several years and wanted to open his own school. I signed up for classes because…Well, swords are cool! I never expected to get as hooked on it as I did, and, when I was suffering from unemployment after social work school, I started working for him in exchange for classes. I’ve been managing Sword Class NYC since 2010 and we just opened our very own studio in Harlem. It’s been a long road, but this is a huge and exciting step for us!

I spend a lot of time at the dojo. I train in two forms, teach classes, and have a lot of administrative duties. One of my main responsibilities (and greatest joys!) is creating an enthusiastic and supportive community. I spend a lot of time with students, but rarely disclose much personal information. One evening, I went out with some students (mostly straight cismen) for drinks after class. After a few rounds, one of the guys pointed out a particularly attractive woman at the bar and I immediately concurred. As soon as the words left my mouth, I panicked. Would they judge me? Worse, would I immediately become a fetishized object? Would I lose the respect I had earned, which is no small thing for a female-presenting person in the martial arts world?

No one missed a beat. The conversation moved on. No one has ever brought it up or treated me differently. I have not become a spokesperson or a token. No one has treated me oddly because they’re trying to demonstrate how OK they are with my queerness. My sexual orientation is a non-issue. My role in the school is defined by my ability, my status as an instructor and manager, and by simply who I am. I am so fortunate to be part of a school that affirms and supports me and am so thankful for the opportunity to help create a safe space in a community when gender and sexual orientation are often stigmatized.

As I have progressed in my training, I have not only become a stronger martial artist, but I have become a stronger person. Gaining rank, becoming an instructor, and building a dojo have given me a level of pride in myself I have never experienced nor expected. Practicing four days a week has increased my patience, focus, and my physical, mental, and emotional endurance. I finally had the courage to explain my identity to my mother. I no longer fear my identity coming up in casual conversation with students, or with most anyone. This Sunday, we’re holding a grand opening party for the new space. I will be celebrating my teachers, my students, and our new home, but I will also be celebrating myself and how the study of the sword has allowed me to be my truest self, in all respects..

Join Sword Class NYC’s Grand Opening Party on Sunday at 1 PM or drop by the dojo at any time!  For more information, send an email to [email protected].

ManhattanAlternative.com's Call for Providers invites those with personal intersections and work experience with more of the communities above to fill out the Provider Application Form.

Blog posts are the sole property of and contain solely the views of the posting author; they do not necessarily represent the views of the individual providers listed on ManhattanAlternative.com.